Arrived early after a very pleasant flight….in stark contrast to the United flight from last June which was a disaster from the beginning….but I digress.

Met with Alpha Omega National Sales Manager, Chelsea Bellows at the house where I will be staying during my visit this week. Chelsea is an amazing person….perfect for Alpha Omega as she has boundless enthusiasium along with a great attitude. We were very lucky to meet her!

After settling in I made the trip (25 minutes) from the city of Napa to Rutherford where Alpha Omega is located to pick up the gear I shipped in advance. This consisted of mostly some warm shirts and my big-‘ol-rubber-boots….needed for the cool and messy work in the cellar.

I met with assistant winemaker Henrik Poulsen who made me comfortable immediately. We talked about whether I would work Sunday and agreed to have me work a half (sort of half) day to ‘break in’.

After that, a little sight seeing and off to bed very early.

Up early at 7 to be at the winery for the morning briefing at 9am.

Since the greatest part of harvest was over (but would continue until January for the late harvest grapes meant for dessert wine, the Sunday crew was small consisting of Henrik (from Denmark), Enologist Charley de Pottere (from Germany) plus cellar workers Enrique Hernandez (Los Angeles) and Pierre Loizeau (from France) as well as Cellarmaster Jose Rodriguez (born and raised in St Helena) and the maintenance man Albaro Rodriguez.

I started my day with Enrique stirring the Lees (wine sediment) on the 2009 Chardonnay.

This consisted of taking an L-shaped metal device that had a shovel type handle and placing is deep in the barrel, via the bung hole, and basically running it all over the inside to mix the contents for about a minute.

Then it was off to Cold Soak with Charley.

In this room the grapes were ready for fermentation but by using the cold soak method delays fermentation.

My job was to add dry ice to one barrel at a time and to punch it down into the grapes to make them cold enough to slow fermentation.

Charley was called away on an emergency so I finished the cold soak and helped with some odds and ends to finish my day.

A good break-in period to ready-up for the week ahead.

Took the time to drive up to Healdsburg to stop by the Unti tasting room and pick up some bottles of their 2007 (early release) Montepulciano. Not surprisingly Mick was out for the afternoon but a pleasant visit and a taste of their Zinfandel made it worth the trip.

Also made a quick stop to see our friends at the Nalle Winery.

The whole family (Doug, Lee & Andrew) were working the tasting room with a good sized crowd. I had a chance to say howdy and talk with each of them and enjoyed a sampling of Nalle’s amazing Chardonnay…..that, was a nice surprise….coming from a ‘red’ guy.

Dinner with our LBTV photographer Jeanette Hrnyak (who is a recent transplant to San Francisco) and her dad Mike at Mustards in Napa…..always a great stop!

Now it was time for the tough stuff.

The day started at 7am for a briefing and assignments. Today was a whole new crew (except Enrique who was the only familiar face to me) which consisted of Rafael, Salvador Hernandez and Everardo Hernandez.

Started with more punching the cold soak grapes but this time letting them sit with a small sprinkling of dry ice on top to slow fermentation.

Afterward Enrique and Everardo showed me how to do the ‘pump over’ on the big tanks (large stainless steel tanks)….a major task.

The tank is drained of the juice into smaller open tank called a ‘race car’. At the same time the juice is pumped through a hose with a nozzle similar to a fireman’s hose nozzle, and sprayed over the cap at the top of the tank via a catwalk.

After pumping 4 tanks the hoses are cleaned and stored.

Cleanliness is a constant at Alpha Omega. The battle over bacteria is never ending and the crew clean at all times of the day after many different jobs.

And while the pumping, punching and other scheduled tasks are taking place, the small plastic trays/boxes used to harvest and sort the grapes are being pressure cleaned along with parts of the sorting table. The emphasis on cleanliness is a major priority.

It’s also worth it to mention that safety is a very big deal at the winery. Accidents can happen at anytime so everyone is aware of the possible dangers involved with all the machinery and extreme room conditions.

While pumping the juice over the cap I was twice overcome by the CO2 fumes rising from the big tanks……I handed the hose over to Enrique and stepped away to get fresh air. I felt light headed, dizzy and disoriented. Thought it was brief, it helped me recognize the possibility of it happening again, so afterwards I was able to keep and eye out for the same thing.

Then we punched the cap on about eight or ten of the big tanks with…what else….BIG (approx 8 foot) stainless steel punches….big and heavy and very hard to control.

Later we again punched the barrels, sprinkled some dry ice on the top of each and called it a day.

There are approx 280 barrels in the cold soak or fermentation stages.

And the end of the previous day winemaker Jean Hoefliger had me join him in the morning to taste the wine frrom the tanks and barrels. Jean told me to arrive at the winery at 5:45am which is the time he begins this process every day. I was happy to be on time.

This morning (and perhaps this day) was one of the greatest educations I’ve have had in this process of making of wine.

Jean and I tasted all 27 of the stainless steel jumbo tanks then tasted several barrels from the cold soak room as well as the hot rooms.

To taste the juice from barrels, Jean used a common pasta strainer by pushing it into the cap to gain juice, then he takes a turkey baster to extract the juice to taste. He then measures Brix (temprature) with a specific tool…tastes…spits and makes notes for each tank/barrel on a voice recorder. By this process the winemaker transfers his notes to paper to create the work orders for the crew each day.

Everything from sweet to bitter to flat to tannic to big to amazing and all in between. We sipped and we spit. There is simply no way to taste this quantity of wine without spitting. No spitting and the day would be ruined and likely so would your liver.

After my stint with Jean, I rejoined Enrique as we added ‘air’ via a ceramic tube fed by compressed air to the barrels in the hot room. The least romantic job at the winery, it takes about ten minutes of watching the paint try for each barrel. With the huge amount of barrels it takes a great deal of time and a fair amount of patience. No cell phone signal here….you learn patience and respect for the process.

And in the end the whole effort shows in the final product.

Then we punched the cap on the barrels in the hot room. This was the most satisfying work of all as there really was a full cap and you felt a great deal of satisfaction combining the top layer of grapes with the juice…..you almost feel a bit like a winemaker yourself.

About this time Jason Fisher a winemaker/owner from Laparita Wines stopped by to check on a barrel that Jean was helping him with.

To further prove what a small world it is I had just visited my favorite Napa wine store the previous evening and purchased a bottle of Liparita wine. What are the odds??

Considering the fact that Monday night I met a guy that has been living in Napa for 37 years but was originally from my home town of Cleveland and attended my very own high school!!!

The day was long but great fun and hard work.

The guys I have worked with this week are tough, strong and willing to do whatever it takes to help forward the cause of great winemaking.

While the crew met with Cellarmaster Jose Hernandez, I was sent to punch the cap on the barrels in the brand new ‘hot room’.

The original room I started in was the cold soak room but since space was becoming more of an issue, that room was changed, all within one day, to the second hot room-a room for fermentation.

The issues at the crew meeting were private so I was able to enjoy myself in the 90 degree room attempting to punch the cap on all 90+ barrels by myself….how very selfish….and after getting through 30 or so, two crew members showed up to help.

We finished and headed to the second hot room to do the same.

After that, back to the large cellar with the huge stainless steel tanks….most of the punching was completed but I was able to do one on a larger tank. Once again the 8 foot punching device was at hand and I managed to complete the task with great satisfaction and very sore hands.

Afterward I was able to find time to shoot more photos of the winery and the property….my camera has been subjected to extreme heat and extreme grapes (and grape stained hands!)

After a lunch and a bit of tidying up around the winery, Salvador and myself headed to the larger, two story hot room with water and big brushes to clean the barrels.

Our job was simple….scrub the inside of the barrel to remove skin, old skin, skin and whatever else is stuck to the top of the barrel.

After a while Enrique joined us and we managed to clean a couple hundred barrels…getting almost as much on ourselves as we did out of the barrel.

After that task was completed, I headed home early (4:30) to ready for the dinner. Jean, Charley, Bruce and other Alpha Omega folk were attending the grand opening of the restaurant Maria Maria in Danfield. Maria Maria is partnership between an AO investor and Carlos Santana.

Tired and well fed, I headed home to sleep in on my ‘so called’ day off.

Two interviews tomorrow with a possible third….but for AO, this is my day off. 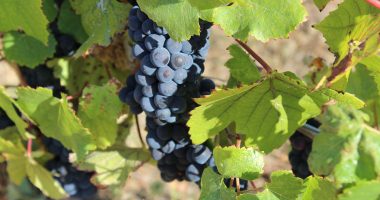 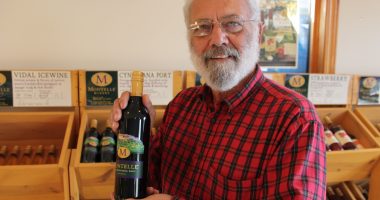